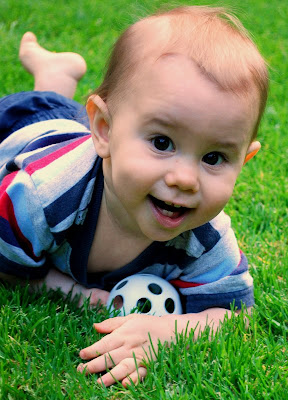 Yes, my little baby Micah is 11 months old today! Where has the time gone?

This has been a huge month of development and growth. Here are some of the highlights

Micah added another tooth this month. He now has 7 teeth to his bite.

He is finally crawling more regularly. However, if he is really in a hurry (like when chasing his siblings) he will still drop to his tummy for a very fast military-type crawl.

Micah is so excited about his new ability to stand up. He grabs anything he can use to pull up to a stand. He is finally able to stand up at the couch and grab his sister's or brother's games, books, or whatever they are doing! Fun new interactions for everyone!

While he is standing with support, he is not really cruising on the furniture yet. I don't think he is planning on being an early walker.

One of my favorite developments is Micah's expanding ability to communicate. He has not only said his first words, he also added several words and some sign language to his vocabulary. Here is what Micah loves to say:
Other ways he enjoys interacting include: waving, hi-fives, smiling (at everyone), singing, screaming, pulling hair....

Micah still loves to eat anything and everything. Tonight he enjoyed his first beets straight from our garden and kept asking for more. We are so thankful for a good eater.

His favorite toys right now are his three little, shaky eggs - blue, red and yellow. They are just the right size, and make a great sound. He also enjoys any new texture that he can put in his mouth.

Sleep continues to get better. We have had several nights with no interruptions (yes, sleeping through the nights). However, we just had a terrible week because Micah had a cold and was so frustrated at his stuffy nose. So, things are still up and down, but overall we are all sleeping better. He is also getting better at naps and some regular type of schedule.

Yay, Micah! Happy 11-month birthday! We are so thankful you are in our family!
Posted by Christy at 11:59 PM

Email ThisBlogThis!Share to TwitterShare to FacebookShare to Pinterest
Labels: Micah