How Can He Be Seven? 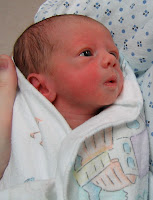 Seven years ago today I held my little 4 pound baby for the first time. As I looked at his sweet face, I felt I recognized him somehow, I knew him. It was love at first sight!

Now here we are, seven years later, and I am amazed that my little Joshua can be so grown up.

Joshua still has that quiet, cheerful disposition he had as a baby. He always seems to have a good attitude, looking for the positives in any situation. His teachers have commented that when asked how he is doing, he always gives an enthusiastic "terrific" or other exclamation!

While he still entertains himself quite well and often prefers to play alone, he has started to appreciate social activities as well. For so long he was clueless about other people around him, but has really grown this year. Last week he received a class award for helping a friend. I asked him about it and he told me one of the new boys  was feeling very nervous about play time outside, so Joshua asked him to play with him.

Becoming a big brother was not easy for Joshua when his little sister began getting into his stuff. Now he loves playing with Abigail, and adores Micah. He is always excited to greet his little brother after school, and makes sure to have at least one "conversation" with him every day. 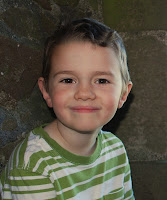 He is so creative in his imaginative play. When he gets excited about something, it comes out in everything he does. For example, he has recently gotten in to the Legend of Zelda video games. It was not long before he and Abigail were dressing up like Link and going on quests.

Joshua loves to read, and, like his father, he enjoys writing his own short stories. Some of his favorite books continue to be the Magic Tree House series. And, much like his mother, Joshua loves to make lists about everything. 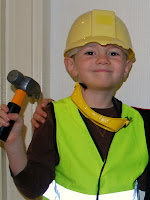 In line with his very methodical personality, Joshua demonstrates a strength for building things ... whether with legos, building blocks, magnetix, and more. He especially loves to follow instructions carefully to create things he sees on the packaging or manuals. But he is beginning to improvise on the instructions when he finds another interesting way to connect the parts.

So, Joshua turns seven years old today. We are so proud of him, and continue to pray for God to use him for His glory.

Happy Birthday, Joshua!
Posted by Christy at 3:50 AM 2 comments: Links to this post