Finally, here are more pictures from our trip to the Highlands back in June. We had two days of wonderful, almost sunny, weather. But our final day at Urquhart Castle on Lock Ness was more typical Scottish weather ... drizzly, with fog rolling over the hills and lake. 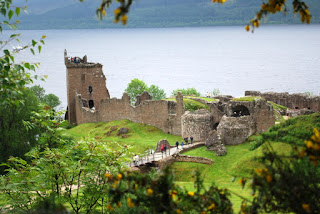 Urquhart Castle is a beautiful ruin, on a location with a rich history over a thousand years. St Columba visited this King of the Picts who live here around AD 580. The English seized the castle in 1296. Several Scottish clans have fought to control this fort through the years as well. This castle has seen hundreds of years of military action. 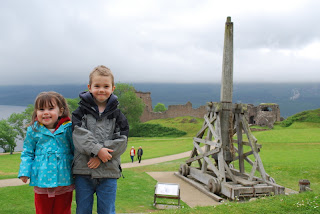 The kids loved the trebuchet that is on display. It is not original to the castle time era, but is quite impressive. There is also a video in the visitor center showing the destructive power of these weapons. 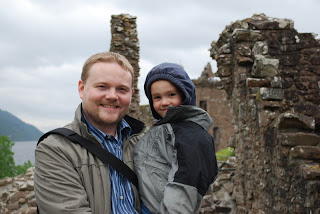 These ruins were fun to explore. The kids enjoyed running up and down the grassy hills, and climbing on the long-fallen walls. Joshua was thrilled that this castle once had a draw bridge and moat of sorts. 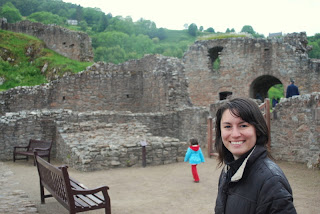 These ruins are spread over the entire hillside, and much of it was built at different times. The kitchens, where we are explore in the picture above, were at the lowest point of the hill, with the domestic buildings above them. 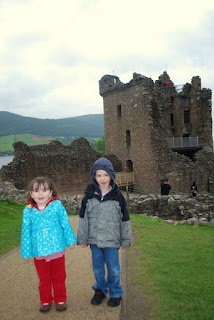 The main tower behind the kids was the primary living space for the ruling family. There were also some servants quarters closer to the kitchens. 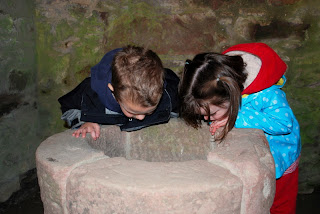 The well was located on the lowest level of the main tower. Joshua and Abigail both had to throw in a coin. Joshua told me later he wished he could be a fireman as he threw in his coin. 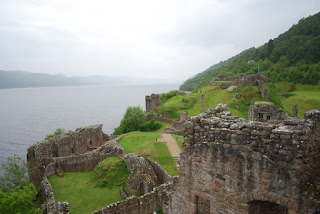 From the top of the tower, you can see the beauty of this military fort. The primary defensive tower and wall is at the top of the hill in the distance. 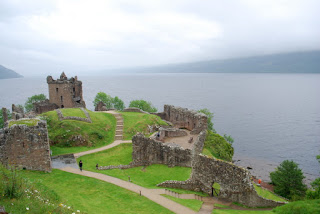 And this view is of the tower and kitchens from the top of the defensive fort. This castle was established for defensive purposes, but it is also an amazing setting, with Loch Ness spreading to the north and south, and the highland hills stretching the entire coast of the loch (lake) on both sides. 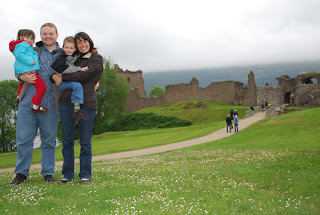 I would have loved to spend another hour or two at this castle, but the rain discouraged the kids. We did, however, watch the video presentation about the history here twice, at Joshua's request. It was a nice presentation! 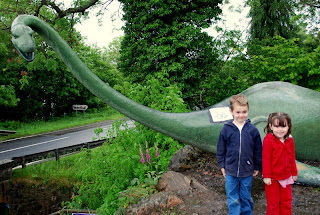 Of coarse, no trip to Loch Ness would be complete without a trip to the Loch Ness Center (though we skipped the exhibits for the kid's sake). We had to get a picture with Nessie, as they lovingly nicknamed the Loch Ness Monster.

Check out more great pictures from our day at Loch Ness and Urquhart Castle.
Posted by Christy at 1:10 PM