Last week, Joshua asked me to help him build a house with his deck of cards. I have no clue where he got this idea, but I knew I was not the best person to teach such a skill. I encouraged him to ask Daddy to show him as soon as he got home. 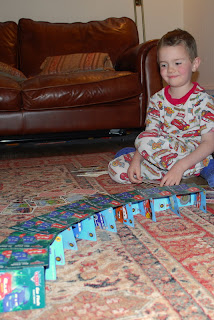 Darren carefully showed the kids how to balance the cards and shared tricks to helping them stay up. He reminisced about the car garages he use to build with his brother. The idea of a garage inspired Joshua. By the end of the evening, after working hard on several failed attempts, he created his own version. 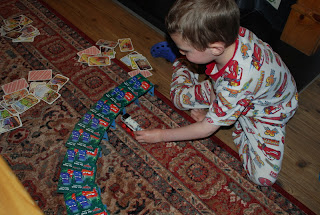 Joshua carefully parked his Stanley train in the new Tidmouth Sheds constructed entirely out of cards. And this has been an obsession ever since. 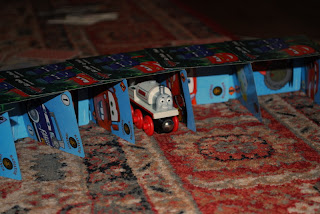 Above is the train parked nicely in the sheds, cozy and dry. His only frustration is that mommy makes him take down the sheds each night and he has to start over in the morning. There are a few more pictures on FB.

Abigail was excited about the building, but became frustrated at her lack of ability. We quickly suggested Legos as a better building option for her. So now the kids sit on the living room floor building houses (or garages) ... Joshua with his cards and Abigail with the Legos. Awesome!
Posted by Christy at 11:09 PM