Last week we took our first trip to the Scottish Highlands on the west coast. It was beautiful!
{By the way, we visited on the longest day of the year, so this night picture was taken at 11:30pm.} 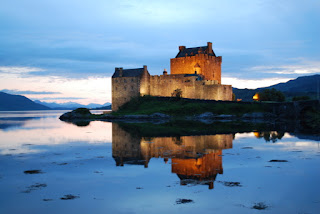 On our first day we visited Eilean Donan Castle. A castle was first built here in the sixth century, and has been destroyed (at least one time by Viking attacks, not to mention clan rivalries) and rebuild many times through the years. It is easily the most recognized castle in Scotland. It is one of the most photographed and is also the location of movies (such as Braveheart). 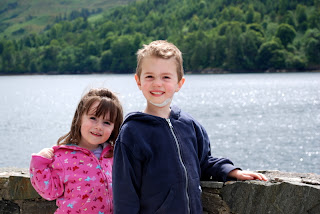 This privately owned castle lay in ruin for 200 hundred years before it was recently rebuild in the nineteenth century. It has really nice displays of life in the castle and artifacts from the clan, including swords. The kids really enjoyed the tour guides, who were dressed in formal kilts. 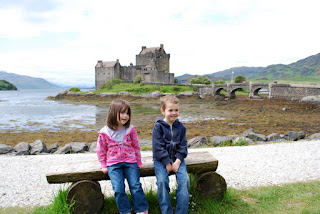 We had beautiful weather. The sun shone so brightly on the water, and the hills around Dornie (the little town nearby) were incredible. 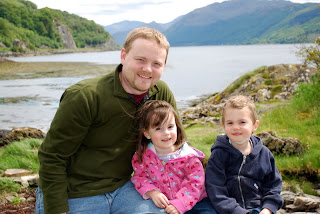 The location is stunning, in the middle of the highlands on the small island of Donan, named after the 6th century Irish Saint, Bishop Donan who came to Scotland around 580 AD. 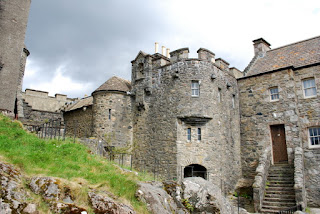 There were also nice displays in the kitchen with life-like mannequins. Joshua kept asking me if they were real people who were once alive and "when did they live here?" He kept touching them to see if they were real, until he grabbed the leg of a tourist who was standing too still ... they both jumped and he decided to stop touching the people. But sorry, no photography inside... 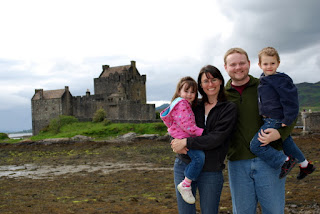 This was a beautiful visit, in an amazing location. The drive out to the castle, though the highlands, was incredible. We took hundred of pictures and still felt like we couldn't quite capture the beauty.
Check out the pictures of the highlands and of Eilean Donan posted on FB.
Posted by Christy at 2:35 PM