We had a wonderful train ride down to York. Joshua was quite thrilled about the train until about hour four when the novelty wore off and he was ready to be there. 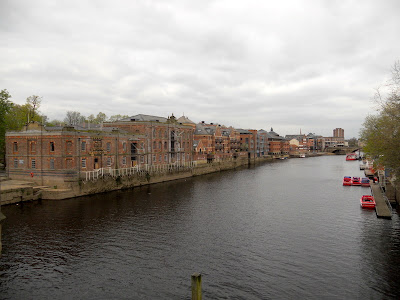 York is a beautiful city with such history to explore. It is built at the junction of two rivers. The Romans founded the city in 71 A.D., though there were residents living in the area long before. The first minster was built in the fifth century and in 306 Constantine was proclaimed emperor in York. Much later the Vikings invaded in 866 A.D. and eventually established a colony here. Not to mention the medieval times and beyond. 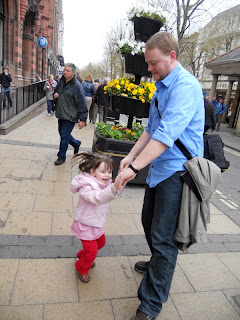 We walked the streets and enjoyed the street performers. Abigail is joyfully dancing to the Irish sounding musicians across the street. There was just a feeling of energy and fun everywhere. 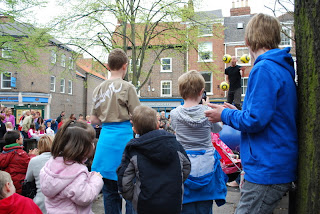 The kids also enjoyed the juggler, who was balancing on a big ball for his entire show, over 30 minutes long. The streets were packed with people all day long, but we had the place mostly to ourselves in the evenings on our walks home after dinner. Beautiful! 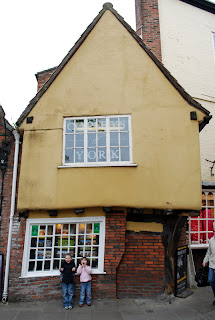 One of the fascinating old streets in York in called Shambles. The building above is at the entrance to the narrow, old street. The current version was rebuilt around 1400. It feels so magical and a little crazy the way the walls and windows lean at odd angles. 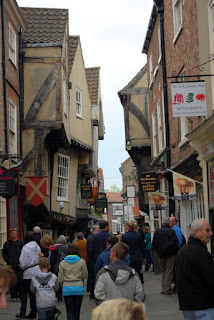 As you walk down the little street, the shops and buildings lean over you and draw you into their past. You also have to wonder how these crooked, leaning buildings have stood for so long. Most of them look as if they should have fallen long ago. 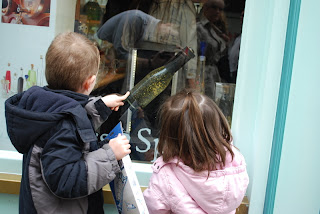 The kids loved looking in all the cute shop windows lining the streets of the old city. There really is an endless supply of amazing window shopping.

Check back tomorrow to read more of our adventures in York.
Posted by Christy at 11:29 PM