Saturday was Doors Open Day in the city of Aberdeen, where you can explore places that are normally closed to the public. As part of this celebration, the fire department opens up Aberdeen Central Fire Station to visitors. I was enjoying a girls-day-out, so Darren took the kids to the fire station for a day of fun. They were THRILLED! 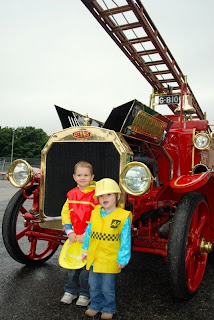 This beautiful, antique fire truck was on display.
Joshua loved telling me about this "really old fire truck" he saw. 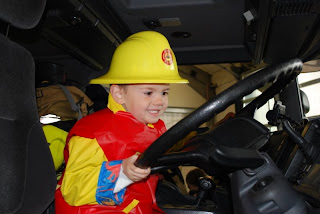 The kids were given a full tour of the currently-used fire trucks. While sitting in the back seat, the fire fighter let them try on the hats and look at the other equipment. Then they moved to the front seat, where they were allowed to "drive" the truck. 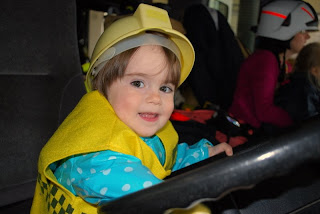 Abigail was so excited about this driving experience. The first thing she said to me when I arrived home that evening was, "Mommy, I drove the fire truck." 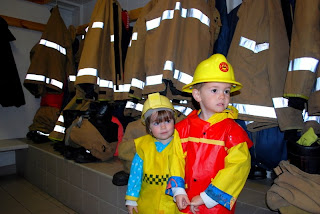 Joshua had a long list of questions to ask the fire fighters ... mostly about equipment. He was excited to learn about their fire suits as well. They keep their trousers around their boots so that they are ready to go. You just step into your boots and pull up your trousers. 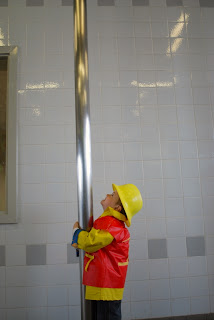 This fireman's pole was a favorite for Joshua. He is always pretending that he is sliding down a fire pole -- the slide, the stairs, etc. 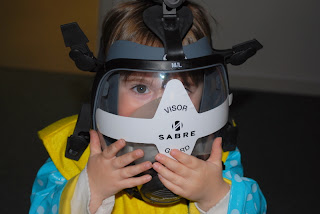 And they each were able to try on the breathing apparatus. Currently the kids use sippy-cup lids as their pretend breathing units. So funny! 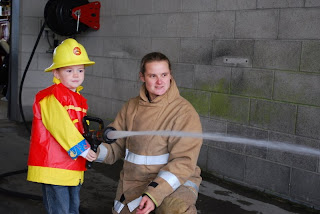 There was a safety and fire demonstration that totally freaked out both the kids. There was a small "kitchen" fire set up; then the firefighter added some accelerant. The huge resulting fire scared everyone. Abigail told me that the fire was on her head... I think that was her way of telling me it was too hot. 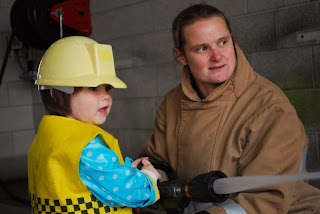 After the demonstration, the kids each had a turn to use the hose to put out a pretend fire in a little house. This was so much fun for both of them. 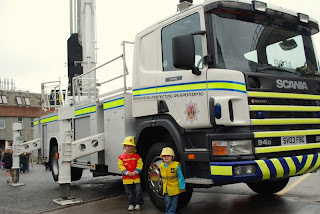 Everything in our house has been about fire fighters this week.

Today the kids ran around in their vests and hats putting out fires around the house. This afternoon, we had our own Open Doors Day at home. Joshua set up the entire house as a fire station. The beds were fire trucks. He showed me around his fire station and told me about his equipment. Then I gave them a tour of the kitchen and talked about the equipment in their (including the Fire Blanket used to put out kitchen fires.)
There are more pictures from their day at Aberdeen Fire Station - Sept 2010.
This was the perfect activity for a day out with Daddy. Everyone had so much fun!
Posted by Christy at 11:20 PM