For our second day in Durham, Joshua, Abigail and I headed out to the National Railway Museum. This is the site of major advances in British Locomotion, and remained central to the design, building and repair of train wagons for over 100 years, closing in the 1980's. 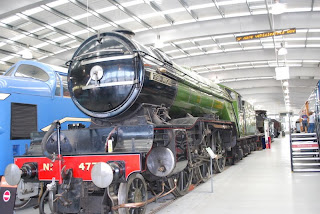 In addition to the historic buildings, there is a new train shed that houses historic engines and wagons and passenger cars. The kids loved wandering through the huge trains. 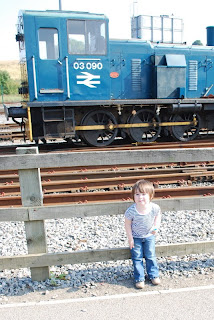 We had another beautiful, sunny day for our visit, which was good because the walk out to the train shed is much longer than I realized. The pedestrian trail takes us down the train tracks, some of which still run the commuter trains, past some old steam engines parked outside. 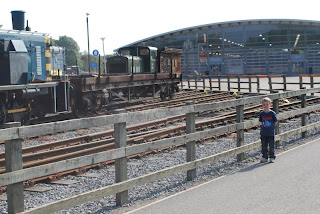 Joshua was quite impressed with the number of tracks and trains running outside the shed. He was also very interested in how they had paved around the old tracks in front of the building and used rubber to keep people from tripping, but can still use them to take the engines in and out of the shed. 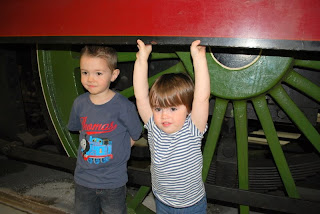 The trains were bigger than either of the kids realized. We explored all the huge engines. Joshua asked questions about the different types of engines -- he is now fixated on "high-speed" engines with the pointier noses. We also looked at the coaches (some of which look a lot like Thomas' coaches, Annie and Claribel), and the trucks and coal cars. 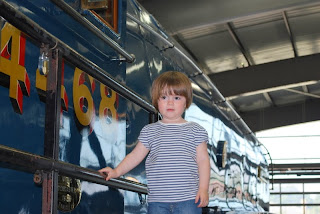 Abigail liked all the stairs that you go up and down to see in the windows. I really appreciated the kid-friendly areas. Throughout the museum them have kids' stations, where they can take a break and learn in other ways. They have tables and pictures set up where kids can sit and color. They also have Thomas beanbag chairs where you can sit and read Thomas books. 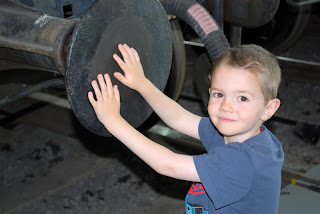 Joshua had to check out the buffers on the train. Again, they were much larger than he realized from watching trains on television.

Scattered throughout the trains they have exhibits and "exercises" where you can shunt trucks to get them in the right order for hauling or pack a model freight car miniature with milk bottles and hay bales. These various activities helped keep Joshua and Abigail amused for quite a while. 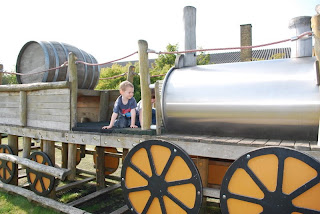 In addition to all the inside activities for kids, they also have a fun playground designed for a large variety of ages. Next to this play area are the picnic tables for eating outside. They also have a cafe inside, but you are not suppose to bring in outside food. There is also a well-kept sand box that the kids enjoyed.

Check out our photo album on Facebook: National Railway Museum - Sept 2010.
Posted by Christy at 11:41 PM