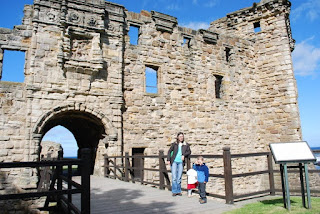 The visitors center of this castle has a nice exhibit about the life and times of this castle, including the influence of the Reformation and John Knox.
Joshua loves it when castles have a moat or a ditch that requires a bridge to enter the castle. And he was not disappointed with this bridge. 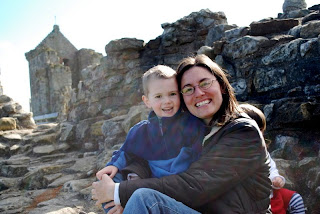 We enjoyed climbing over the broken down walls and up the remaining staircases. There was a huge well in the middle of the courtyard that we all look down into.
This castle also had a "bottle" dungeon, named for its unique shape. It looks like a well at the top, but opens up to a rounded room about 20 feet down. I would not want to be dropped into that prison. 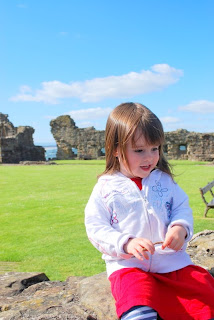 The kids enjoyed the view of the sea crashing on the rocks below the castle. We promised a trip down to the sandy shores when we were finished looking at the castle. 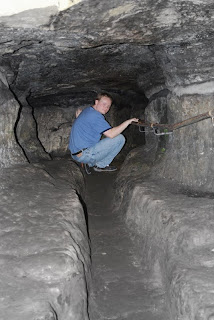 One unique feature of this castle was the remaining mines and counter-mines that were dug by enemy soldiers under the wall of the castle. The goal was to weaken the integrity of the ground beneath the wall, so it would collapse. It was freaky crawling down this dark, narrow tunnel that had been dug so many years ago. This tunnel continued for 500 feet at least, but I was not willing to go beyond the first corner. Never knew I could be claustrophobic, but this did it for me. 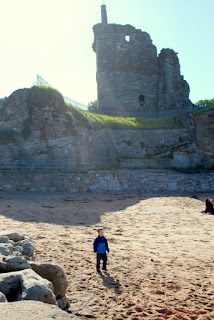 The castle is beautiful from the view of the sandy beach. The sea had begun to wash away the outer edges of the castle. They built this retaining wall to keep from losing more of the castle to erosion. 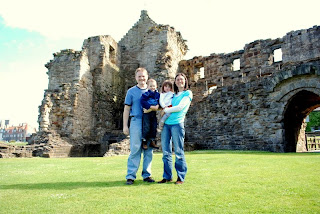