Last weekend we rented a car here in Scotland for the first time since we moved here nine months ago. We got a great deal on a little (the smallest they had) car, with a manual transmission -- this means I had the privilege of driving all weekend, as Darren doesn't drive a 'stick'.  So early Friday morning my adventures in driving began. 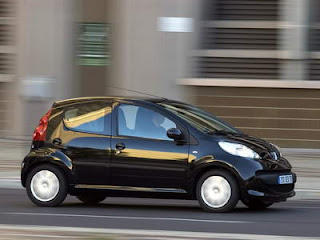 We rented a little Peugeot 107 (this picture is from the Peugeot site, not a picture of the car we actually rented). It looked far too small to be a four door, but we did have back door access to the kids in their car seats (which was WONDERFUL)! 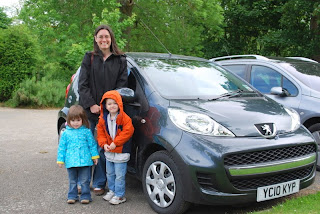 I won't spend too much time talking about the time I barely avoided an accident... Instead, I'll focus on the positive.

I was very nervous about driving here, but it was not as hard as I expected. The flow of traffic really helps... just follow the guy in front of you. However, I did get disoriented a few times after turning onto a new road, especially when making a left-hand turn.

Any time I went to turn right I found myself looking over my shoulder to check my blind spot because it felt like I was turning across two lanes of traffic (imagine turning right from the inside lane...).

I adjusted fairly quickly to changing gears with my left hand, though it was a little harder when under pressure. I found that my right hand was not as accustomed to holding the wheel steady while shifting.

And Darren can attest that I favored the left side a little too much, trying to stay far away from the oncoming traffic on the right. I admit I ran over a curb at least once, but the victory is that I never hit anything. 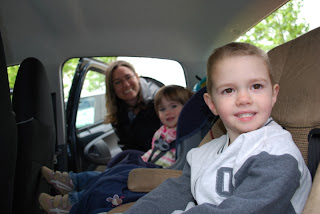 The kids loved being in the car again, and riding in their car seats. And we really enjoyed the freedom on having a car to get around. And we took full advantage of it. We visited five castles, one cathedral, St. Andrews University (and town), the Macduff Aquarium, and the Aberdeen Highland Games.

Stay tuned for more about our adventures in some upcoming. And feel free to ask me all those crazy questions about driving on the opposite side of the road!
Posted by Christy at 11:30 PM