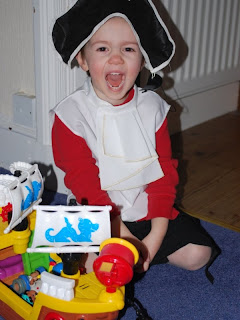 My little Joshua is growing so quickly. He is already four-years-old and learning so much all the time.

Here is an interview I conducted a few month ago and forgot to post. I re-asked the questions today; some answers were the same, most were different. The first answer is from January, the second answer is from today.

What is your favorite food?
Chicken nuggets / Grapes

What is mommy's job?
be with me and Abigail

What is daddy's job?
go to school

How old is daddy?
50 years old, he is going to have his birthday / (today he remembered exactly how old Darren really is)

Why is Abigail the best little sister?
We share our toys / We play together

What is your favorite book?
Thomas the Tank Engine / Sharing a Shell

What is your favorite video?
Bob the Builder / UP (the Pixar movie - he only watched the whole thing for the first time today)

What is your favorite toy?
Trains /(this answer was the same today)

What do you like to play outside?
Play ball / Trains (we have some trains you can play on at the parks nearby)

If you could go on a trip anywhere, where would you go?
to the library / to the train park

Joshua has become so creative in his play. He loves to act out stories with his trains, cars and little people. Some of his favorites are Thomas the Tank Engine and Pixar's CARS. But his creativity extends far beyond his movies. 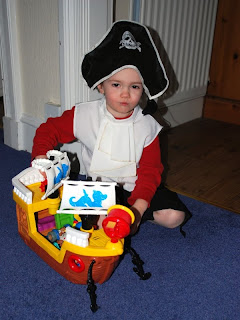 He has become a big fan of books, too. His favorites are read over and over until he has them memorized. Joshua is extremely resourceful in recreating his stories. I am amazed at the items that are included in his play -- stuffed animals, dishes, trains, cars, etc. Wonderful! And it is fun to watch him combine stories and characters in new ways.

As you can see, we recently acquired a pirate costume. He loves to dress up and play with his little people pirate ship. And he can really get into the character. To the right you can see his 'pirate face' as he says "ARG!" to me.

He has newly become interested in castles, as we have started to tour Scotland castles in the area. Though, he is not yet excited about the people who lived in the castles -- kings, knights, etc.

Joshua loves Bob the Builder and is constantly on the lookout for construction equipment of any kind. Road construction is now our friend. There was a team digging up the road to fix a gas leak on our way to school. Everyday he would tell me about the progress they had made. Today he pointed out the place where they had filled in the holes they dug ... two weeks ago.

Maybe he wants to take after his grandpa ... he is constantly pulling out his (pretend) tools and "fixing" things around the house. Some days he tells me he is repairing the wall because it is almost a ruin (like one of the castles we visited). Other times he is building the entire castle in our living room. Most of the time he is repairing our doors and walls. 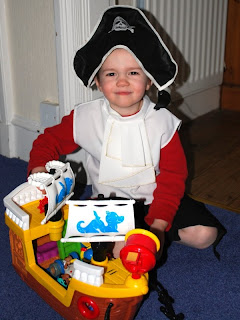 Another recent fascination is with buses. Joshua loves the double-decker buses they have here, and the double long ones. We rode a double-decker out to a castle  a few weeks ago and he has loved them ever since. We found a bus game at the library and he asks to play it every day. Sometimes we set up the entire game, but most of the time he makes up his own game using the buses and passengers any way he likes.

Joshua has finally discovered the joy of singing. Maybe he was just too shy before, but now he loves to sing. He brings home new songs from school and teaches them to Abigail. It is so cute! And he loves to dance. When Darren was in Manchester, he was walking past a bagpiper while we were on the phone. I put it on speaker so the kids could hear the music. They both started dancing to the bagpipes. Too funny!

My little boy had known his alphabet since he was two, but has only recently been interested in the sounds that letters make. Just this week he asked me to write out some words for him and is excited about the combination of letters that make up words.

Joshua has grown so much in the last six months. I can only imagine all he will learn in the next few years. I wanted to take the time now to remember what a wonderful little boy he is and enjoy every moment with him.

Stay tuned tomorrow for a post "all about Abigail."
Posted by Christy at 11:15 PM