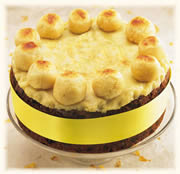 Although this holiday is (almost) as commercialized here in Scotland as it is in the U.S., this celebration actually originated here in the 16th century. It started as the practice of returning to your "mother church" (the church you grew up in) once each year. Even indentured servants were released by their masters that weekend to visit their families. For many, this would be their one opportunity each year to see their mothers.

As the culture became more secular, the holiday became about showing appreciation to your own mother and the traditional concept of 'mother church' was mostly lost. By 1935 this holiday was no longer celebrated in most of Europe, but during WWII the tradition was revived by some Americans who came to fight and celebrated Anna Jarvis' Mother' Day in March.

Some of the historical traditions of the holiday also revived, like the tradition of eating cake, typically simnel cake, which was prepared by young girls in servitude to be taken to their mothers on their day off. Simnel cake is a light fruit cake covered in  marzipan (or almond paste); a layer of marzipan is also baked into the middle of the cake. (This cake is also traditionally used at Easter and during Lent with marzipan balls decorating the top representing the disciples.)