Saturday before last, we decided to visit the local Maritime Museum just south of Aberdeen's downtown strip. We want to give Joshua more opportunities to walk; so instead of pushing the double buggy all the way downtown, we hopped a bus with the single pushchair (umbrella stroller).

As we got off the bus, Darren caught some shots of the beautiful buildings in the downtown area. Behind Joshua is the Town and County Hall, containing the courts and government offices. 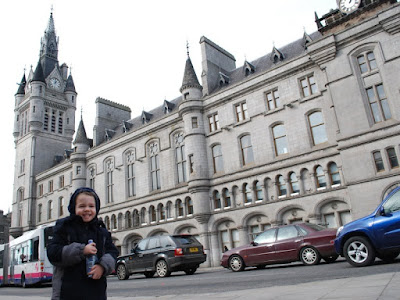 While the kids take a moment for snacks and drinks, Darren catches another great picture. In the background, you can see Castle Gate at the eastern end of downtown. This is where Aberdeen's only castle once stood many years ago. 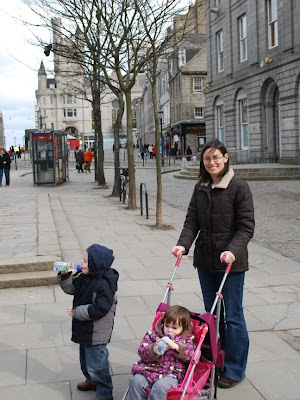 After wandering around a little bit (I forgot the map), we finally arrived at the Maritime Museum. We were not allowed to take any pictures inside (trade secrets, I guess), but if you look closely you can see a wonderful ship model in the window behind Joshua. 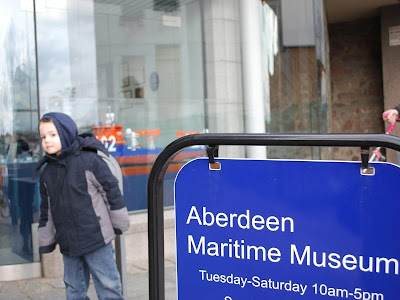 The museum was very enjoyable, and entrance is free (always a good thing). There are exhibits about fishing and ship building, but the heart of the museum is the oil rig running up the open center of the building. Joshua was most excited about the models of both boats and oil rigs. They also enjoyed the remote controlled model of an underwater explorer unit.

Just outside the museum is the harbor when the ships are docked. We watched the boats from the top floor of the museum for quite sometime. Once back outside, we walked down as close as we could to the ships. 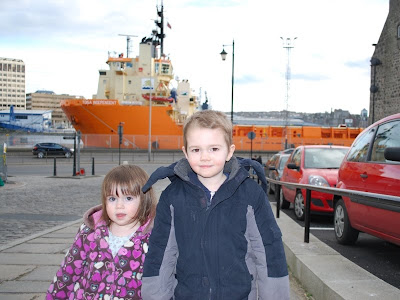 The new mall, Union Station, is only a few blocks from the museum, so we headed over for some window shopping. The first stop was primarily for Darren and I ... Costa Coffee. 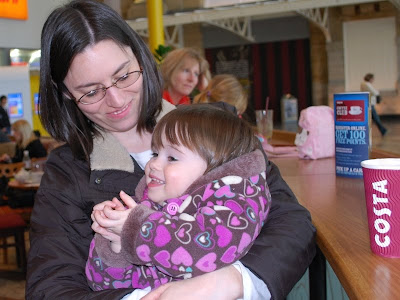 A little caffeine later, we were off walking the mall. Of coarse, this mall is a little weird and doesn't have much besides clothes and sit-down restaurants. Eventually we decided to walk up to the other malls where they have shops with games and toys.

What a great day we had as a family, exploring and learning more about this great city we live in!
Check out more pictures from our day at: Family Fun - Spring 2010
Posted by Christy at 11:22 PM