The kids loved the higher-than-usual snowfalls this year in Aberdeen. 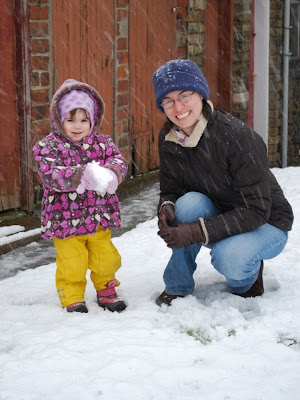 Abigail did not remember the snow she experienced last winter in Princeton. For her, she was learning about it for the first time. It took some convincing for her to hold a snow ball, but once she played for a few minutes she was thrilled anytime we went in the snow. 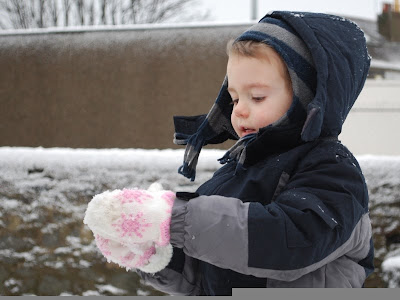 Joshua, on the other hand, remembered the snow of years gone by and could hardly wait to make snow balls. He loves to throw them at the wall and watch them splat. 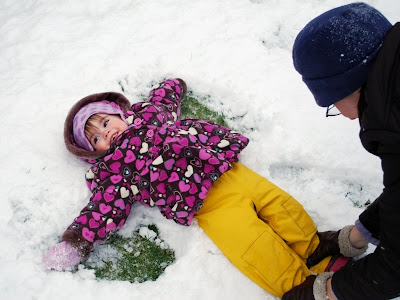 I demonstrated a snow angel for the kids. Joshua refused to lay in the snow, even for a moment. But Abigail was so excited to make her own angel, and would ask for help making them at every opportunity. 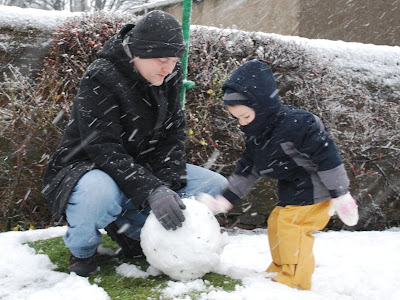 The first snow fall in Aberdeen was perfect for making snow men. It held together so well, without being too wet. Daddy and Joshua worked hard to make the perfect snow man. 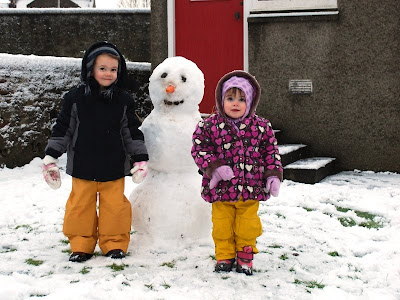 The college students living in the flat below us noticed our labors and donated a big, fat carrot for the nose. This carrot was a thrill and excitement for the kids. There were several mornings when we had to go back out in the snow to fix the carrot nose which had fallen in the night. When the snow finally melted, Joshua insisted on going to the back garden and finding the carrot to bring inside.

The snow stuck around for several weeks in December and early January, melting and refreezing, leaving lots of ice everywhere. The sidewalks were a mess and completely impassable with a buggy (stroller). We were snowed in. Mommy got a little grouchy about this, but the kids loved every minute of snow!
Posted by Christy at 11:27 PM