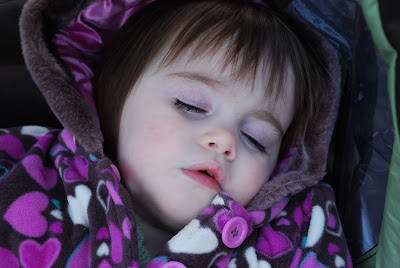 What a crazy week we have had!

On Thursday evening, Abigail was so fussy and hot to the touch. While fighting with an hysterical child, we took her temperature - it was at 103 F (39.5 C). I immediately called the emergency health line.

We ended up taking her in to the emergency room to rule out several possibilities. After finding no other symptoms, they said it was probably a viral infection and to watch her closely overnight.

I was so thankful that Darren had not left for his night out with the guys (instead, he spent the evening with Joshua at home) and that we had friends here who could take Abigail and I to the hospital and stay with us.

No other symptoms had appeared by Friday when we went to see our doctor. He agreed it was a virus. It could be swine flu because of the extreme temperatures, but no way to know for sure.

The fever is slowing lessening. She seems to be much better today, but still fussy if her medication wears off. With the new snow fall, she has been so disappointed that she doesn't get to go out and play with Daddy and Joshua. Maybe by tomorrow she will be well enough to get out of the house. As for me, I'm just looking forward to a good night's sleep.
Posted by Christy at 6:07 AM

Email ThisBlogThis!Share to TwitterShare to FacebookShare to Pinterest
Labels: Kids