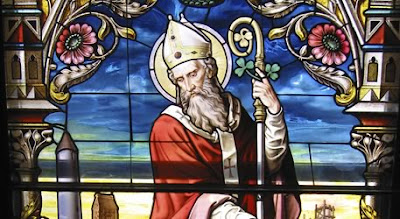 March 17 is a day set aside to celebrate the life of Saint Patrick, one of the patron saints of Ireland. It is believed that he died on March 17, 460 A.D.

Saint Patrick was born to a wealthy family in Wales. At age 16, he was kidnapped by Irish raiders and spent six years in slavery before he escaped.

Much of his time in Ireland was spent working alone as a shepherd. During this time of solitude, he became a devout in his faith. It is also believed that it was at this time in his life that he began dreaming of converting the Irish to Christianity.

After he returned to Britain, he was told in a dream to return to Ireland as a missionary. He undertook 15 years of study and ordination as a priest before returning to Ireland with a dual mission - to minister to Christians there and to convert the Irish.

Saint Patrick left an incredible legacy! Not only did he bring "many thousands" to the Lord, he also proved the viability of missions for the church. His example inspired later missionaries to greater levels evangelism abroad.

Email ThisBlogThis!Share to TwitterShare to FacebookShare to Pinterest
Labels: Heroes of the Faith, Random