Lord, you have been our dwelling place in all generations.
Psalm 90:1

The place of our true belonging is not a place made by human hands. It is fashioned for us by God, who came to pitch his tent among us, invite us to his place, and prepare a room for us in his own house.

Words for "home" are often used in the Old and New Testaments. The Psalms are filled with yearning to dwell in the house of God ... It is highly significant that John describes Jesus as the Word of God living among us (John 1:14), and in his farewell address, Jesus reveals himself as the new home: "Abide in me as I abide in you" (John 15:4).

O God, as we celebrate your coming into the world to redeem us, may we never forget that you are our ultimate home.
LifeSigns
Henri J. M. Nouwen
Posted by Christy at 4:00 AM No comments: Links to this post

Glory to God in the highest, and peace on earth, good will toward men.
Luke 2:14

Peace on earth seems to be an elusive thing. There are wars fought around the world. Terrorism. Conflict with our neighbors and co-workers. This world is a far cry from peace.

Yet at the birth of Christ, before he had done anything, God declared "Peace on earth." The entrance of the God-Man Jesus Christ into our sinful, war-ridden world altered our existence forever. Believe it or not, there is now peace on earth.

Today I am pondering the part of this "peace on earth" that we currently have. After the surprising entrance onto the scene of Immanuel, God with us, we now have peace with God through our Lord Jesus Christ. (Rom 5:1) God was reconciling the world to himself in Christ, not counting people's sins against them. (2 Cor 5:19)

Where we were once enemies with God, separated from his grace and love, we are now brought back into relationship with him. And he has called us to declare a message of peace, of reconciliation -- with himself, with each other, with the whole of creation.

Although we may not see this happen in our lifetime, still we have this promise: "Peace on earth, good will to men."
Posted by Christy at 4:10 AM No comments: Links to this post

The Fullness of Time

O God, we than you for the joy of Christmas celebrations, which spring from our celebration of Jesus born into our world to save it.
Bread for the Journey
Henri J. M. Nouwen
Posted by Christy at 4:00 AM No comments: Links to this post

As a continuation to my post on "Greener Cleaners", my first post is about the earth's natural air cleaner -- PLANTS!

In the 1960's, NASA started research into the environment's ability to clean itself. The research was inspired by the observation that some swamp plants were cleaning their environment of chemicals leaked into the waterway near a biological warfare testing facility.

In addition to cleaning these chemical spills, they were also working to provide engineers with the information to design a sustainable living environment for long-term habitation in space. Check out NASA's article Plants Clean Air and Water for Indoor Environments.

What does this mean for my family? When we return from our Christmas visit with family, we will be adding some plants to our home: a few spider plants and a few Pothos and possibly a Cast Iron plant. These plants are well know to be effective in cleaning toxins from the air. Too bad I can't take plants on the airplane -- my mom has both spider plants and Pothos to spare.

For a great list of other air-filtering plants, visit Wikipedia's entry on this topic.

The University of Connecticut's College of Agriculture has a great list of safe and poisonous house plants, for those of you with kids and pets.

Find some great plants you can add to your home to help clean your indoor environment this winter!
Posted by Christy at 6:18 AM 2 comments: Links to this post

Listen! I am standing at the door, knocking; if you hear my voice and open the door, I will come in to you and eat with you, and you with me.
Revelation 3:20

Is there space in our life where the Spirit of God has a chance to speak or act or show up? Being contemplative means peeling off the blindfolds that keep us from seeing his coming in us and around us and learning to listen in the spaces of quiet we leave for God.

I [Nouwen] once spent time walking in New York City. I noticed most places were filled up, with much crowded into every corner! We seem to have a fear of empty spaces. We want to fill up what is empty. Perhaps our fear is that an empty space means that something may happen to us that we cannot predict, that is new, that leads us to a place we might not want to go. I might not want to hear what God has to say.

O God, help us to nurture empty spaces in our lives so that we may be filled with your grace and peace.

Turn My Mourning Into Dancing
Henri J. M. Nouwen
Posted by Christy at 4:00 AM No comments: Links to this post

This is an additional post in my series on "Greener Cleaners".

I have been frustrated with my smelly diaper pail. I have tried all sorts of thing, but its in like the plastic has absorbed the smell over time. I use Lysol every time I change it, and that chemical smell hangs in the air for hours.

This week I tried something new that I read in this book, Clean House, Clean Planet.

Mix baking soda with a few drops of an essential oil. I used orange because I already had some on hand, but the book recommends peppermint oil. After cleaning the garbage can, sprinkle on some scented baking soda.

I was amazed at how effective this was at killing the odor entirely. And there is a fresh orange scent every time I dispose of a dirty diaper.
Posted by Christy at 7:33 AM 2 comments: Links to this post

Learn from me, for I am gentle and humble in heart.
Matthew 11:29

God chose powerlessness. God chose to enter into human history in complete weakness. That divine choice forms the center of the Christian faith. In Jesus of Nazareth, the powerless God appeared among us to unmask the illusion of power, to disarm the prince of darkness who rules the world, and to bring the divided human race to new unity.

Through total and unmitigated powerlessness, God shows us divine mercy. The radical, divine choice is the choice to reveal glory, beauty, truth, peace, joy, and most of all, love in and through the complete divestment of power. It is very hard -- if not impossible -- for us to grasp this divine mystery.

Jesus, in all we do and say this Advent, may we follow your example of gentleness and humility.

Finding My Way Home: Pathways to Life and the Spirit
Henri J. M. Nouwen
Posted by Christy at 4:00 AM No comments: Links to this post

Has it really been three years since my little boy was born?
Joshua Oliver Sumner
December 5, 2005
4 pounds 2 ounces - 17 inches long 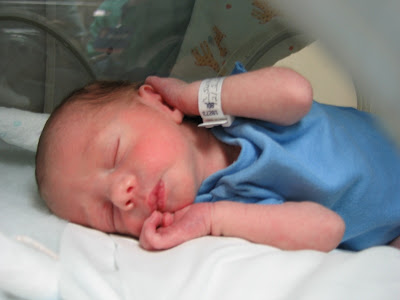 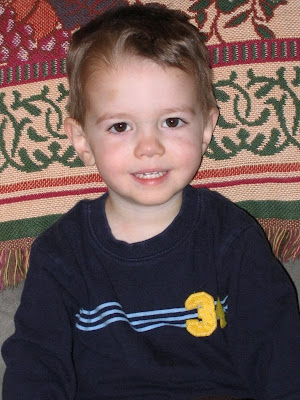 We are so thankful for God's faithfulness and his gift of this sweet and silly little boy!
Now he is an energetic, little preschooler.

Happy Birthday, Joshua!
Posted by Christy at 5:12 AM 2 comments: Links to this post

As I have been re-baby-proofing this week, I have been thinking about my all the chemicals I use. Maybe I need to entirely reconsider what I allow in my home -- for the benefit of children, my family and my world. Our family is taking another important step toward being green.

I have been using Febreze air fresheners for years, especially since moving to this little apartment with two indoor cats and two kids in diapers. Here is their ingredients list:

Well, at least they don't use CFC's (ozone-destroying) for propellant and it contains no phosphates, but do I really feel good about using something to freshen my air that has to include huge warnings about inhaling this product?

The sprays are normally an alcohol base with an assortment of chemicals and synthetic fragrances. They use propellants like butane and propane (although, Febreze states that their propellants are "non-flammable" and "natural"). In addition, aerosol cans are expensive to manufacture -- you pay big prices for a little bit of chemical dispensed in a cool way -- and environmentally inefficient -- a small amount of chemical for the size container that is disposed.

This has really opened my eyes to all the toxins and chemicals that my family is exposed to on a regular basis. Something needs to change...

Stay tuned to my next post. I'll be talking about the alternative air fresheners that our family is now using.
Posted by Christy at 7:04 AM 2 comments: Links to this post

I know I'm a day late, but I wanted to acknowledge World AIDS day.

Yesterday was the 20th anniversary of World AIDS day. There have been huge advances in the fight against HIV/AIDS in the last two decades, but there is so much work to be done --
This disease such strong stigmas and stereotypes connected with it. Many of these originate because of fear and ignorance. In my mind, this is akin to leprosy in Jesus' day. Here is a strong example of his response to this feared disease and those suffering with it.


While he was in one of the cities, there came a man full of leprosy. And when he saw Jesus, he fell on his face and begged him, "Lord, if you will, you can make me clean." And Jesus stretched out his hand and touched him, saying,

We should be responding to those with HIV/AIDS with the same kindness. Not that we can heal everyone who has this disease, but we are called to "touch" those around us in need, both figuratively and literally.

During college, I met a single mom with two small girls (ages one and three) who had recently learned that she had AIDS. In addition to this, she was heart-broken to learn that one of her girls also had HIV. The life expectancy of her daughter was only 18 years, if she was able to remain on the expensive treatments available in this country to slow the disease.

About once a month, a friend and I would go visit this woman and play with her girls. Mostly we went to give her a break from her mothering responsibilities, and to give the girls a change of pace. This went on for about two years.

I remember one person asking me whether I every touched this woman and her children. The question reflected his fear and lack of knowledge. I shared the story of the first time she hugged me. I was so moved that she would trust me with her children and care enough to open herself up to me in this way.

I have since lost touch with this friend, but her courage in the face of this situation changed my life. I am thankful for the chance to have known her. I am also thankful that in this country she was able to receive treatment and support that she and her young daughter could not have afforded on their own.

Please take a moment to learn more about HIV/AIDS.

Posted by Christy at 7:04 AM No comments: Links to this post